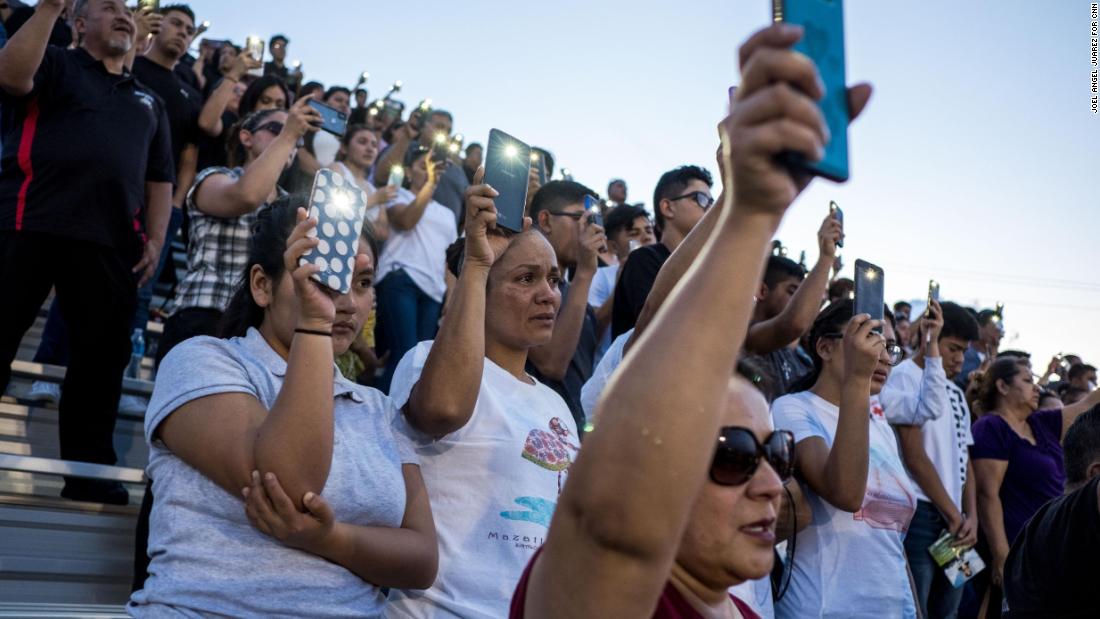 (CNN)In many parts of Texas there are phrases rarely mentioned in polite company, white supremacy being one of them. 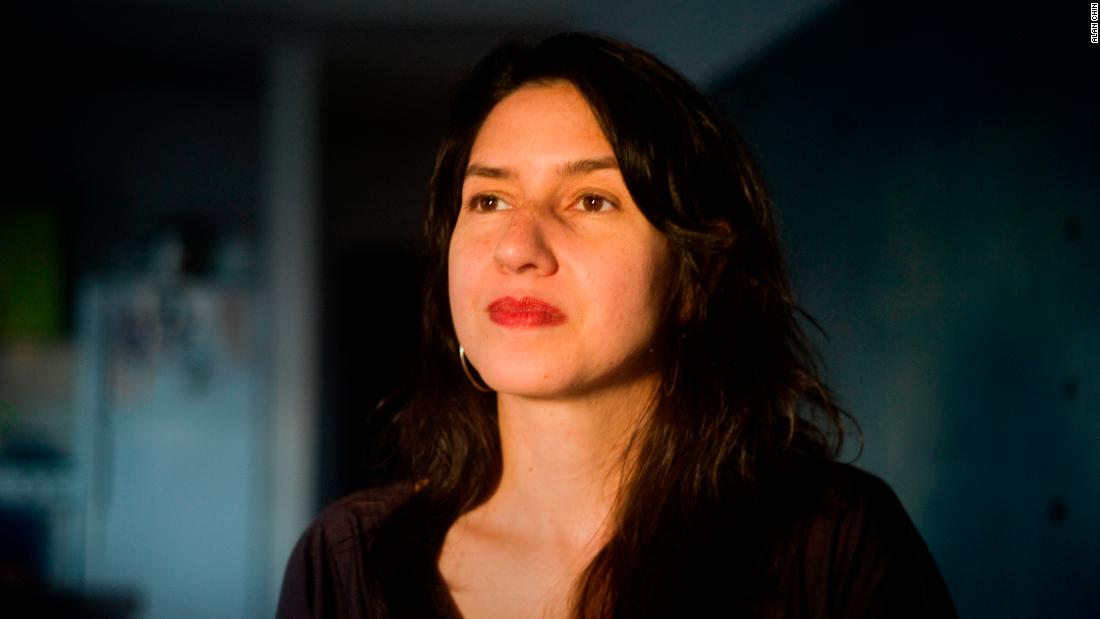 But on September 7, a little more than one month after a gunman in a racially motivated attack killed 22 people in El Paso and following another gunman’s shooting rampage in the cities of Midland and Odessa, pleasantries and politics will be cast aside. Immigrant rights groups and members of the Poor People’s Campaign have organized a concert, the El Paso Firme Music Fest, that includes performances from world-class musicians such as Residente and Ana Tijoux and is presented as a call to action against white supremacy.
Organizers seem intent on disabusing anyone of the notion that ongoing hateful anti-immigrant sentiment and violent debates about border security are simply policy differences about law and order, not expressions of racism. They are right in this — the El Paso violence was an attack on Mexicans, as a prior statement attributed to the gunman makes clear. Anyone familiar with the lexicon of race in Texas knows, for most, “Mexican” refers to citizen, non-citizen, green card holders and Tejanos whose roots in the state predate the battle of the Alamo.
On concert day, 78-year-old El Paso resident Guillermo Glenn, who survived the massacre and who grew up near Odessa and still has family there, will be among the speakers. He plans to correct some misperceptions about the deadliest attack on Latinos in modern history. Rather than a remote racist ideological island or aberration, the massacre was the violent expression of an ongoing assault against Latinos in Texas. 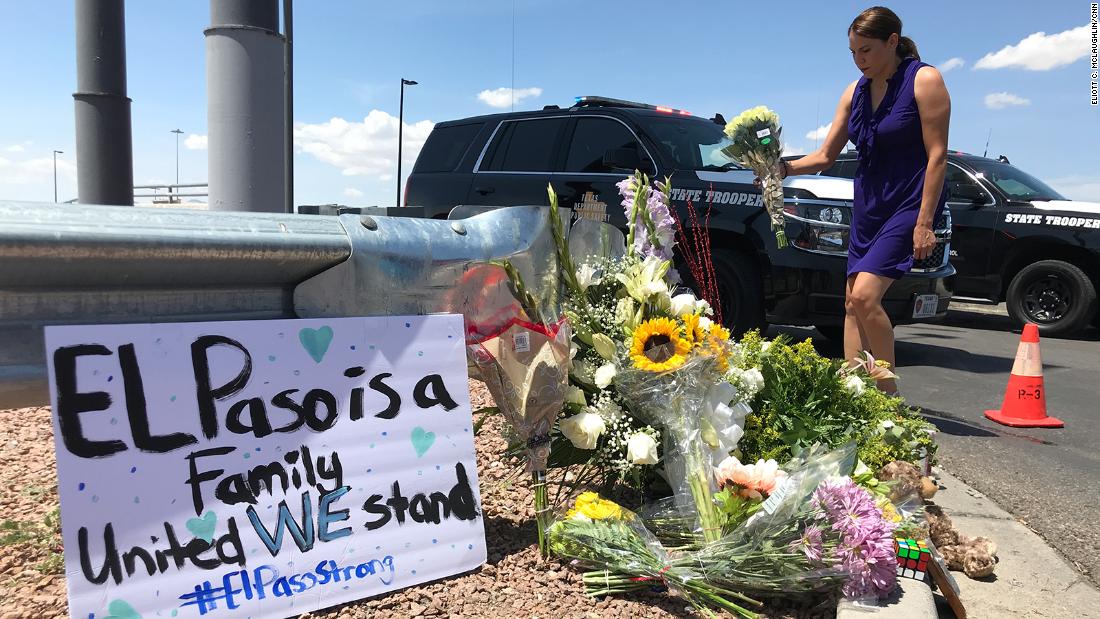 “The incident is very clearly defined (as a) terrorist act, but you can’t see the institutional racism,” Glenn recently told me in El Paso. “It’s very difficult to distinguish the whole ideology from the system that hides it.”
The signs are obvious to those who look.
The state’s massive racial wealth inequality — which the former state demographer partly attributed to generational discrimination — was reflected in the details of the El Paso massacre itself. The confessed killer belonged to one of the state’s most overwhelmingly white and wealthiest counties and attacked a city where the mainly Latino workforce earns one-half the median income of whites. He also traveled over 600 miles out of his way to attack this community.
Racist ideology, says Glenn, was already blatantly on display in the El Paso area just days before the massacre. “What would attract the white supremacist,” asked Glenn. “Well, you already have armed white supremacists who are right on the edge of the city.”
The group Glenn was referring to as attracting white supremacists is “We Build the Wall,” a privately funded so-called border wall in the tiny town of Sunland Park, New Mexico, just a few miles from downtown El Paso.
The group’s web site describes its mission to “unite private citizens that share a common belief in providing national security for our Southern Border through the construction, administration and maintenance of physical barriers inhibiting illegal entry into the United States.” A week before the massacre Kris Kobach and Steve Bannon, supporters of the wall project, traveled to the site for a weekend “symposium.” Interestingly, not one of the five locals, mostly Latinos, who I spoke with in Sunland Park last week could locate the wall or mentioned the so-called security symposium. 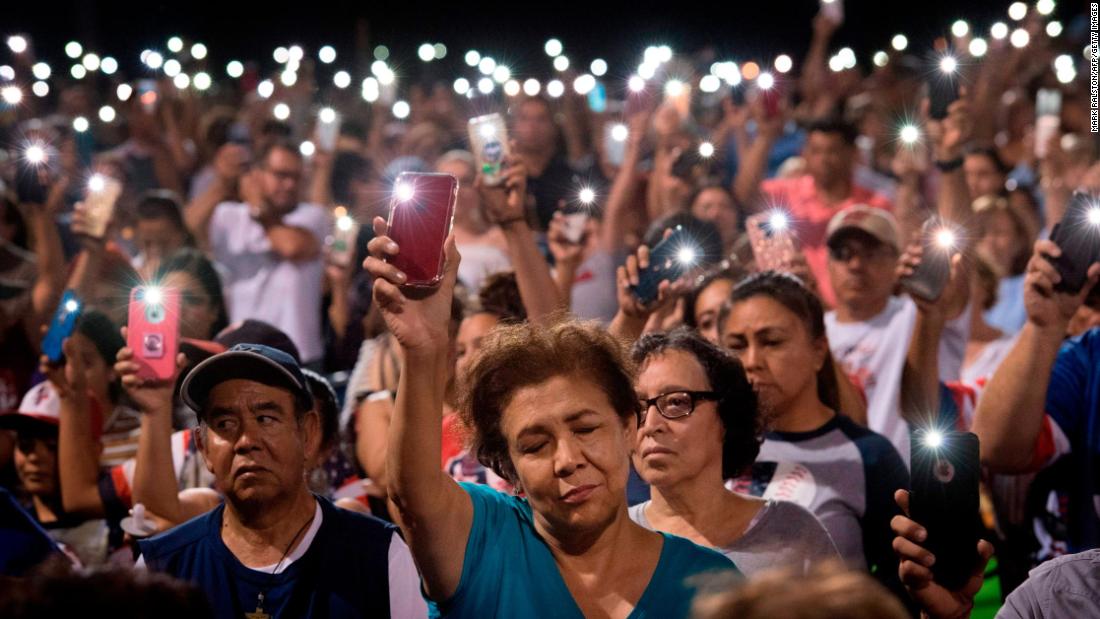 To be sure, the wall brigade and relentless mentions of an “invasion” by President Trump are echoed in the confessed killer’s written statement. But that’s just the surface level connection and it obscures the backdrop of ongoing political warfare against Latinos in the state.
“We have been bullied, our community has been bullied relentlessly to give up our power,” said Antonio Arellano, interim executive director of Jolt Action, a statewide group to mobilize Latinx voters. “This was motivated by the fact that we are growing in influence and political power.”
At least one prominent Republican appears to agree. Artemio Muniz, the chairman of the Federation of Hispanic Republicans, told NBC that the gunman’s statement, which referenced white replacement and Latino ascent to political power that ushers an end of the Republican grip on politics, echoes language used by party members.
“We can sit here and say ‘Trump,’ but it’s been going on for years,” Muniz said
In 2006, long before Trump rattled the political class with phrases of “bad hombres” at the border, Texas’ current lieutenant governor, Dan Patrick, rallied a base when he ran for a state Senate seat by making “stop the invasion” his battle cry and sounding false alarms about immigrants carrying “Third World diseases.”
This was conveniently overlooked when Patrick responded to the El Paso by asking “what do we expect” when kids are allowed to play video games instead of going church. (Patrick also issued a brief statement on his web site after the shooting.) 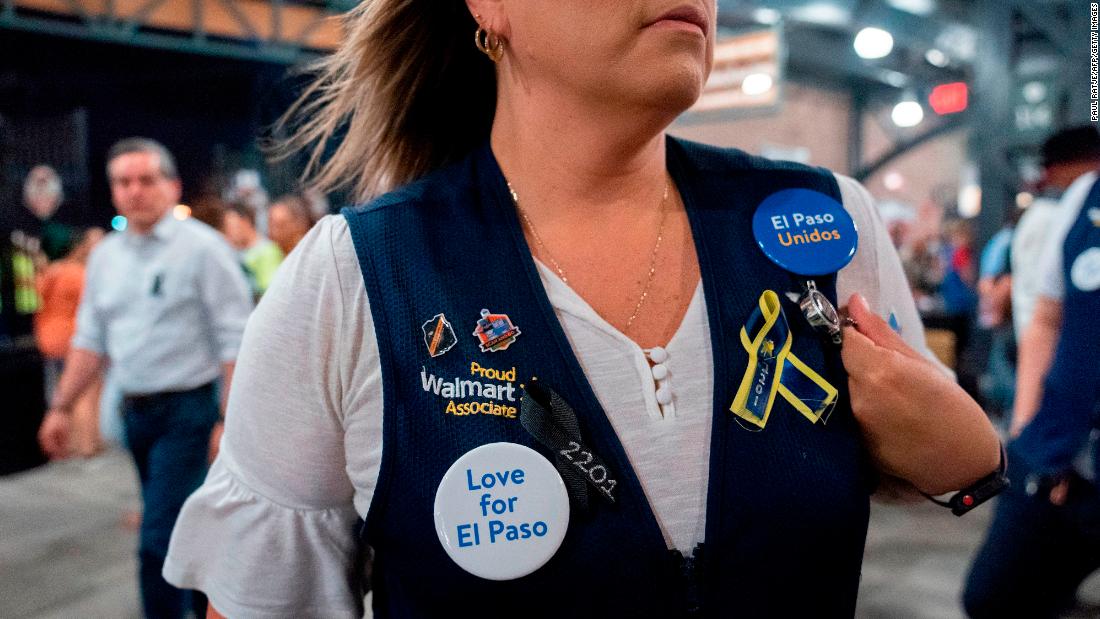 It should be unsurprising that someone would perceive an “invasion” after state lawmakers attempted to deny birth certificates to the US-born children of undocumented immigrants, according to the Texas Tribune. The notion that all Latinos are somehow suspect makes sense in a state that effectively legalized racial profiling with its controversial “show me your papers” (SB4) law, which was adopted two years ago.
Any notion that race was not the issue was dispelled before the final vote in the Legislature when former state Rep. Matt Rinaldi, whose district is a 30-minute drive from the El Paso’s suspect’s hometown, bragged to Latino Democrats that he had summoned immigration agents in response to disruptive Latino activists who were protesting in the House gallery.
Three years ago, Texas Attorney General Ken Paxton, who has released statements expressing sympathies for victims in both El Paso and Odessa and Midland shootings, waged a vicious legal battle to defend SB4. A federal court partially upheld the law.
In a state where no Texas Democrat has won statewide office in 25 years, the 21-year-old El Paso killer belongs to a generation that grew up at a time when predictions of a blue Texas are discussed, by some, as a defeat akin to the battle at the Alamo. 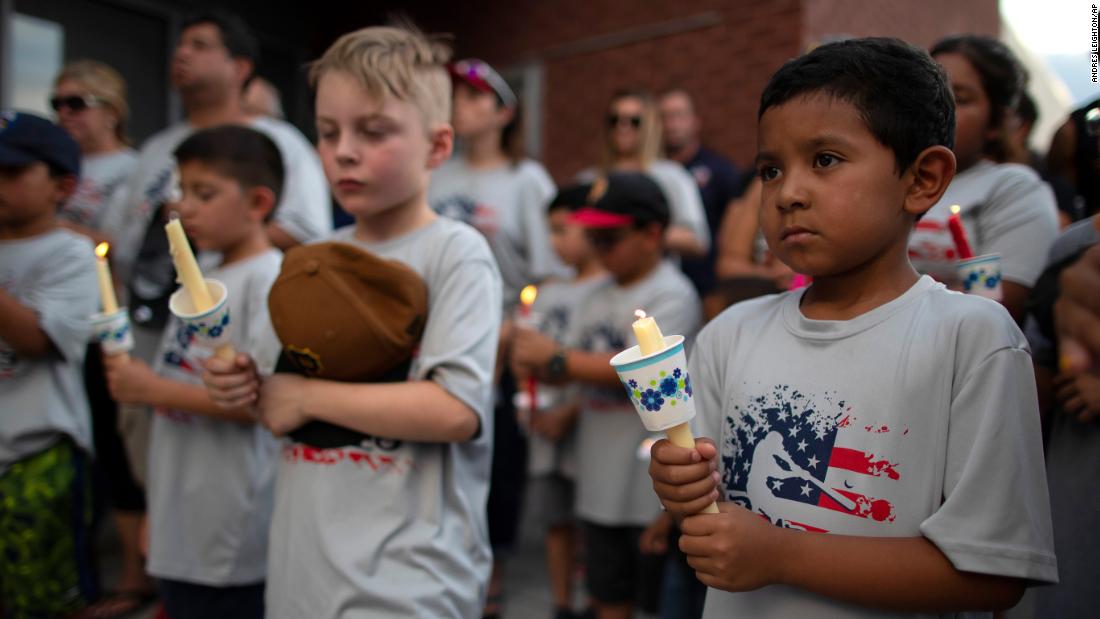 And lawmakers have acted accordingly. Texas has one of the toughest voter ID laws, which are known to heavily impact voter turnout among non-whites. Gerrymandering and the lengthy legal challenges against it by civil rights groups was close to a way of life in Texas. Earlier this year, the state attempted to purge the voter rolls of noncitizens and the citizenship of nearly 100,000 registered voters were questioned. A tiny fraction, roughly 80, were ultimately deemed ineligible but not before the list was shared with local election authorities.
The blanket claims of “hate” rest on a system of power. The massacre represented the violent culmination of political warfare. If this was not already clear through policy, it was spelled out the day before the massacre when Texas Gov. Greg Abbott sent a fundraising letter calling on supporters to “DEFEND” the state against “illegal immigrants” and equating demographics with electoral change shows.
The fear of change is not unfounded. Trump’s margin of victory in Texas is easily quashed by mobilizing the 3 million eligible Latino voters in Texas, who didn’t cast a ballot.
In his so-called “manifesto,” the alleged killer described an impending Texas future as a Democratic stronghold that would result in the “destruction” of the nation and he targeted people whose citizenship and claim to political rights have been systematically and relentlessly attacked in Texas: Latinos.
According to a Texas Department of Public Safety report obtained by the Texas Tribune, he told police he went into the Walmart, then back out to his car to complete and publish the manifesto before returning to the store to kill El Pasoans and Mexican shoppers from Juarez. 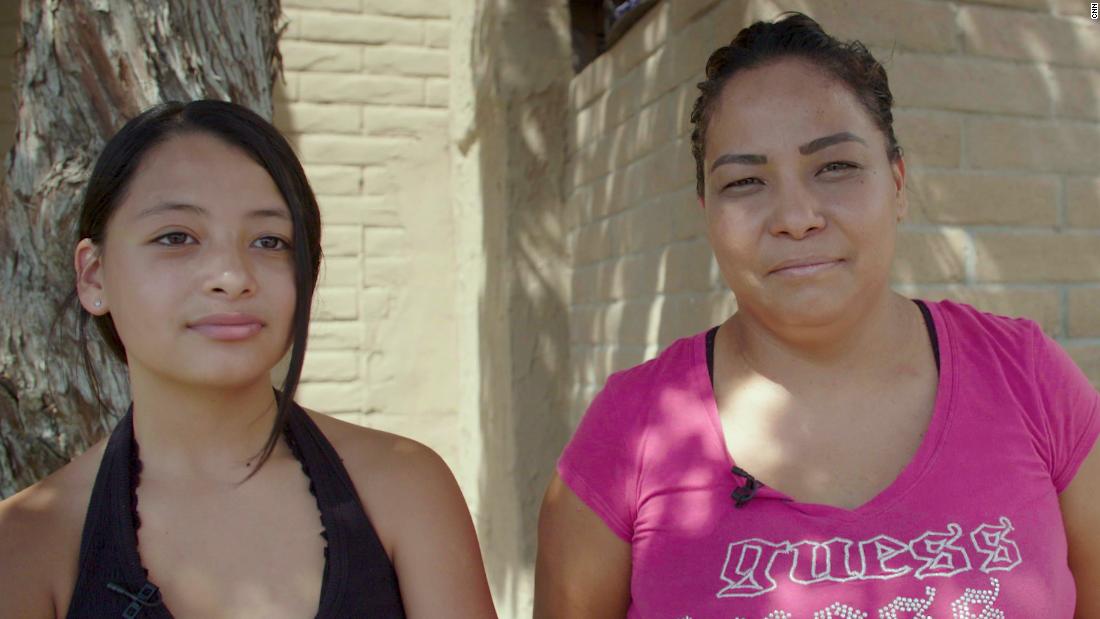 Attacking Latinos is deeply woven into the genetic coding of the state that was built on the perception that some are more worthy to govern than others. In the 1968 history “Lone Star: A History of Texas and the Texans,” regarded as “canonical,” by some, author T.R. Fehrenbach described the growing Latino population as analogous to an invasion and civil rights gains that curtailed state-sponsored oppression as a Texas retaken by the Latinos via the ballot box.
Even after the massacre, efforts at marginalization shamelessly persist. In response to the massacre, Abbott named a task force. Of the 18 members appointed to, in Abbott’s words, “root out the extremist ideologies that fuel hatred and violence in our state,” three are women and one is Latino. Even in death, the claim to power is evident. At the recent memorial, which drew thousands, the speakers included a parade of mostly white elected officials and not one member of the victims’ families.
But to some, the relentless campaign of marginalization and dehumanization has a galvanizing effect. Arellano, Jolt’s director, tells his group’s Latinx members and eligible voters, “We measure our freedom by courage. When we are afraid, we are no longer free.” And, he says, that the suppression is indicative of the political potential of Latinos in the state.
Indeed, Latinos are projected to be the largest non-white voting group in 2020, according to estimates by the Pew Research Center. There are indications that anti-Latino, anti-immigrant rhetoric will have a mobilizing effect on Latino voters. Matt Barreto, co-founder of Latino Decisions, says that his research shows strong intent among Latino registered voters in Texas to come out to the polls in 2020 and that many in the community say they view Trump and Republicans as hostile to Latinos.

Despite the oppressive climate and now outright violence, none of the Democratic presidential candidates have addressed the unique strain of racism toward Latinos in its full historical scope and context. In the upcoming debate on September 12, in Houston, Democrats have a chance to speak to this generation’s deep hostility toward Latinos who now fear becoming victim 23 and who represent a potentially decisive vote in Texas.
On Saturday, in El Paso, however, artists, clergy, musicians and the public will be creating a language, a message to define the moment — an end to white supremacy. And it’s long overdue.

adminIn Texas, a call to action against white supremacy09.12.2019

Musicians ‘have to be proactive’ on climate change

Coldplay ‘not touring’ to help environment

Queuing for days to see your favourite band