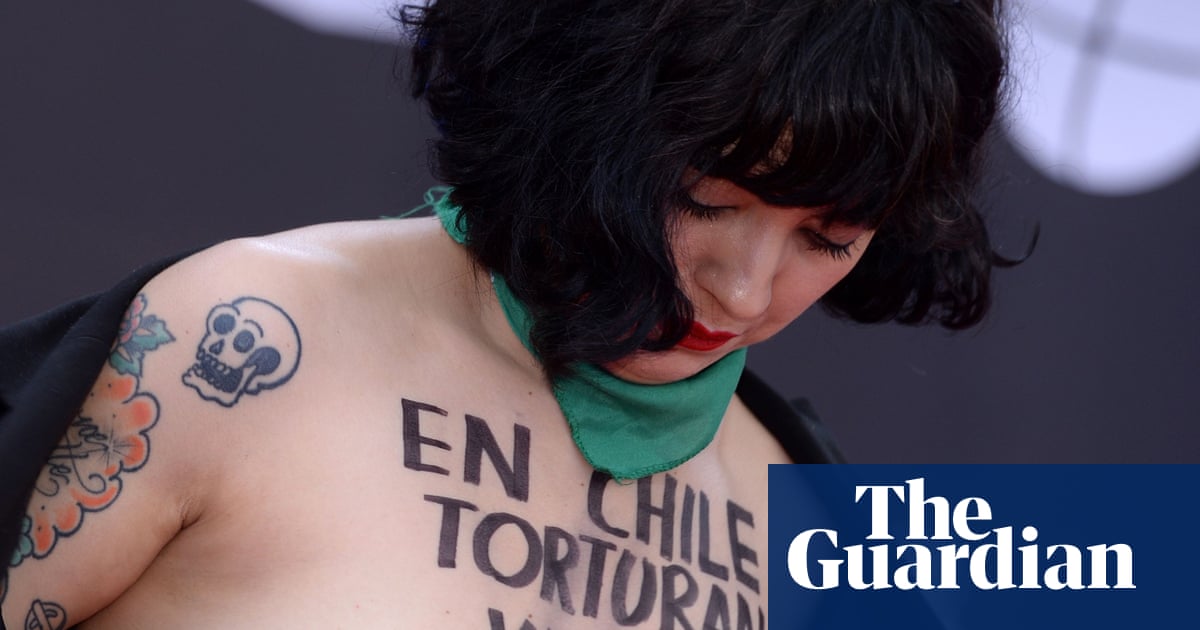 The Chilean singer Mon Laferte exposed her breasts during a broadcast of the Latin Grammys, in the latest of a string of high-profile shows of support for anti-government demonstrators in her home country.

The 36-year-old singer-songwriter made her silent protest against police brutality on Thursday night as she walked the award ceremonys red carpet in Las Vegas.

At one point, Laferte stopped and opened her black jacket to reveal the phrase En Chile torturan violan y matan written on her chest In Chile they torture, rape and kill.

Chile has been racked by more than a month of protests over political exclusion and economic inequality. More than 20 people have died in the unrest, at least five of them at the hands of state forces, who have also been accused of torture, rape and indiscriminate violence during the crackdown.

Hundreds have been blinded after being shot with pellet guns by riot police, and thousands have been arrested, though most have been released soon after.

Laferte went on to win the award for best alternative album which she dedicated to the people of Chile. Later, she posted an image of her Grammys protest on Instagram, with the caption my body free for a free homeland.

Chilean musicians and sportsmen and women have been outspoken in their expressions of support for the protests, which started over a hike in subway fares and transformed into demands for sweeping changes to the economic and political model established by the dictator August Pinochet.

Protesters won a significant victory early on Friday when the national congress agreed to hold a referendum next year to replace the constitution, but it was unclear if that move would be enough to placate the wave of fury against the embattled president, Sebastin Piera.

This week, players with the national football team announced they would not participate in next weeks friendly against Peru.

Were footballers but above all were people and citizens, the captain, Gary Medel, who plays in defence for Bologna, wrote on Twitter.

Right now Chile has much more important priorities than next Tuesdays match.

Several players also expressed support. Theres a difficult atmosphere and in my opinion we shouldnt play out of respect for whats happening in the country, Bayer Leverkusens 74-time capped midfielder Charles Arnguiz said.

The decision to cancel the game was taken following a team meeting on Wednesday morning at Chiles training center on the outskirts of the capital, Santiago, ANFP said. Coach Reinaldo Rueda then released all his players back to their clubs.

The protest has also reached Chiles national jiu-jitsu team after players Ivn Len and Cristian Araya unfurled protest banners on the podium after winning bronze in a match against Argentina.

At the awards, Mon Laferte was one of several artists who spoke about the political climate in several Latin American countries.

Boris Johnson accused of running scared from public in Somerset

We finished every bottle! Berlin’s cultural legends on the night the Wall came down