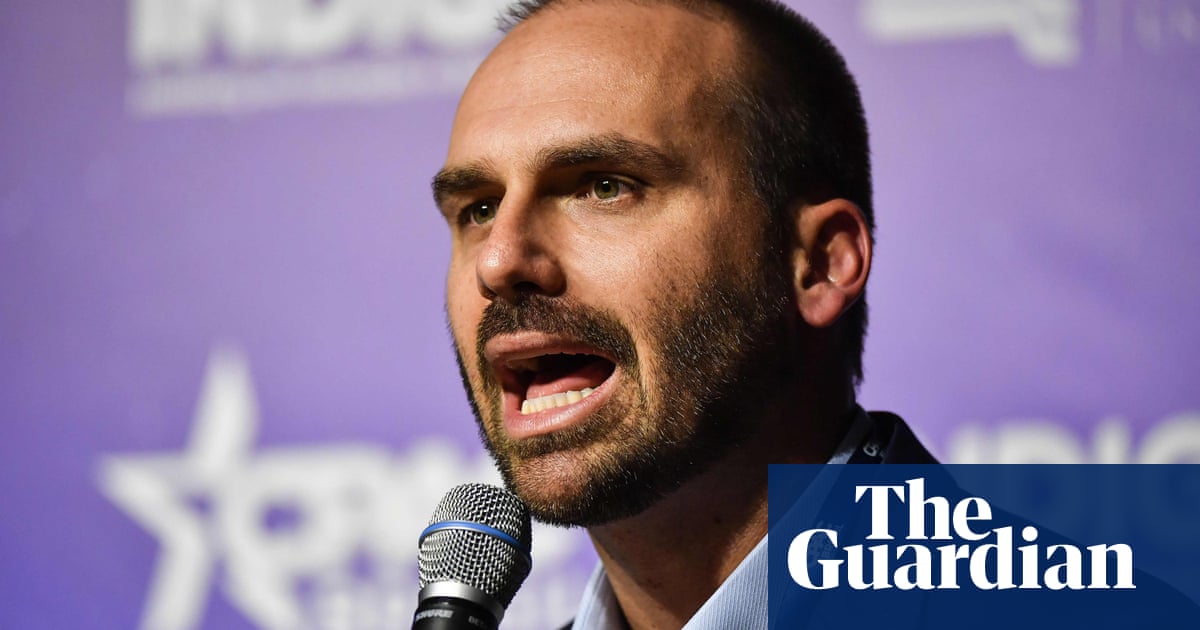 Voices from across Brazils political spectrum have condemned the son of the far-right president, Jair Bolsonaro, after he suggested hardline dictatorship-era tactics might be needed to crush his fathers leftist foes.

Eduardo Bolsonaro made the incendiary remarks which many observers suspect were a deliberate distraction from renewed media speculation over the familys links to organized crime during a softball YouTube interview broadcast on Thursday.

In the interview the 35-year-old congressman claimed without offering evidence that the recent wave of Latin American protests and the lefts return to power in Argentina were part of a Cuba-funded conspiracy to bring revolution to Latin America.

If the left radicalizes to this extent [in Brazil] we will need to respond, and that response could come via a new AI-5, said Bolsonaro, who is the regional representative of Steve Bannons far-right group The Movement.

That was a reference to one of the most traumatic events in recent Brazilian history December 1968s Institutional Act Number Five (AI-5) – when Brazils military rulers moved to extinguish growing political unrest by indefinitely outlawing freedom of expression and assembly and closing congress.

The AI-5 was an instrument intended to intimidate people It allowed the dictatorship to repress all opposition and dissent, the historians Lilia Schwarz and Heloisa M Starling wrote in their recent biography of Brazil.

As a new era of suppression began and dissidents fled into exile, one newspaper tried to skirt the censors with a now famous front page weather forecast that announced: Stormy weather. Suffocating temperature. Air unbreathable. The country is being swept by strong winds.

AI-5 was such a symbolic moment because it signalled the intensification of the military movements authoritarianism, Schwarz said.

In a country still grappling with the legacy of those grim days of authoritarian rule, Bolsonaros provocation for which he later offered a partial apology sparked outrage, from left to right.

Declarations such as those of Eduardo Bolsonaro are repugnant, the speaker of Brazils lower house, Rodrigo Maia, tweeted.

The AI-5 suspended rights and introduced censorship: an authoritarians dream. The dream of the [Bolsonaro] clan, tweeted Joice Hasselmann, a disaffected Bolsonaro ally. We cannot allow this serious attack on democracy.

Leftwing politicians vowed to seek the politicians removal from office. Eduardo is a spoiled brat bawling his authoritarian desires We will not stand for it, tweeted the progressive senator Randolfe Rodrigues, summoning Brazilians to a day of anti-authoritarian protests next Tuesday.

Its a bit like Donald Trumps tendency: every time you feel a scandal drawing near you do something to draw attention away from that matter and put it somewhere else, she said.

Foreign observers were also aghast. I never thought I would hear such nonsense out of Brazil, one veteran ambassador told the Brazilian journalist Jamil Chade.

The controversy caps an anarchic week in Brazilian politics.

In the early hours of Wednesday Brazils president launched a furious tirade against the putrid press from a hotel room in Saudi Arabia. That outburst came after Brazils top broadcaster revealed the investigation into the 2018 assassination of the leftist politician Marielle Franco suggested the suspects had met at Bolsonaros compound before the attack.

Make yourselves at home: the meaning of hospitality in a divided world