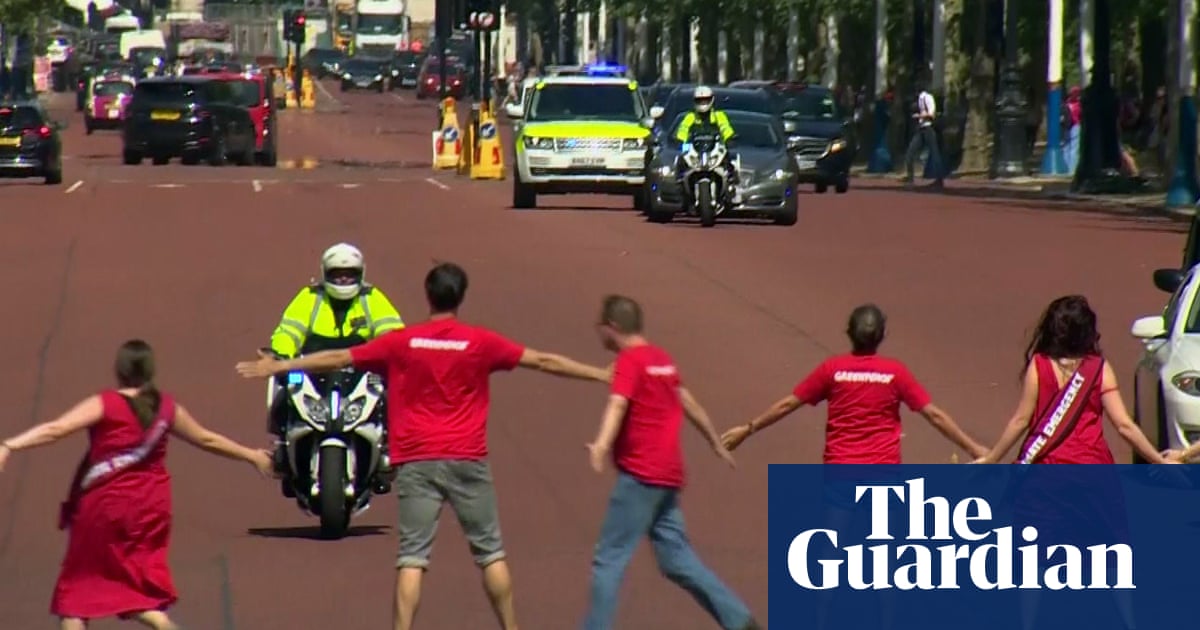 Environmental protesters blocked the path of Boris Johnsons car on Wednesday as he made his way to Buckingham Palace to officially become Britains new prime minister. The protesters said they were aiming to highlight the need to tackle the climate emergency.

The Greenpeace activists joined hands across the Mall as Johnson was making his way to meet the Queen. The protest, in which the activists had planned to hand a letter to Johnson that detailed how to end the climate crisis, was quickly broken up by police.

The former Green party leader Natalie Bennett said on Twitter that the event was a reminder for Boris Johnson, in case the air-conditioning was making him forget. She added that the climate emergency should be at the top of his in-tray.

The protest came just before the Queen asked Johnson to form a government, after Theresa Mays resignation as prime minister and his victory in the Conservative leadership contest on Tuesday.

On Wednesday evening, hundreds of people gathered in Russell Square in London to protest against Johnsons ascension and the government.

The demo, dubbed fck govt fck boris after a lyric from Stormzys Vossi Bop and billed as a street festival, featured a bus with the words emblazoned on it as a nod to Johnsons 350m for the NHS promise on the side of the Vote Leave campaign bus.

The Labour leftwing grassroots movement Momentum, the Womens Strike Assembly and Guardian columnist Owen Jones were among the events organisers.

After a DJ set and performances from musicians, the demonstrators began marching through central London towards Trafalgar Square. Later, a group of protesters, more than 10,000 according to organisers estimates, marched south to the gates of Downing Street, many of them chanting: Boris Johnson, fuck off back to Eton.

Downing Street was put into lockdown as the gates were blockaded by about 100 officers and a dozen riot vans, and no one was allowed in and out of that entrance. Meanwhile, the anti-Johnson campaigners set off purple and pink flares as they danced to booming music.

Just before 8pm, MP Grant Shapps turned up at the Downing Street gates, where he was promptly turned away by an armed officer on duty.

On the other side of the gates, and away from the demonstration, a string of tight-lipped Tory MPs made their way out of No 10 as further appointments were announced. They each walked straight from No 10 to a private exit which took them towards the Foreign Office buildings or a back exit.

Shapps eventually used a different route to No 10, where he learned that he had been made transport secretary.

The shadow chancellor, John McDonnell, earlier gave a speech in Russell Square in which he described Johnson as a racist and a liar. He also warned onlookers not to fall for his buffoonery.

Lois Ward-Marvin, 23, a tattoo artist, was among the demonstrators. She said: I dont want Boris Johnson to be prime minister the people that did vote for him were all white men. Hes racist, sexist, homophobic, and I dont think he really wants to bring change for good.

However, Ward-Marvin added that she did not know who in politics would be a better fit for the post. Im Jewish, so the antisemitism row has pushed me away from Labour, she said.

Also in the crowd was lecturer Kevin Logan, 54. He said he was protesting against Johnsons incompetence. He added: Hes going to be awful and Im really scared of whats going to happen with Brexit with him in power.

The doctor will serenade you now: surgery prescribes tunes as tonics

Boris Johnson accused of running scared from public in Somerset